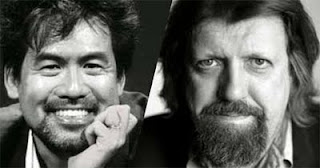 Writer/producer David Henry Hwang and Oskar Eustis, artistic director of the Public Theater in New York, engage in a conversation about their craft, including the creative development of Hwang's upcoming production of Chinglish at the Goodman Theatre.

Throughout his career, playwright David Henry Hwang has explored the complexities of forging Eastern and Western cultures in a contemporary America. He is best known as the author of M. Butterfly, which ran for two years on Broadway, won the 1988 Tony, Drama Desk, John Gassner, and Outer Critics Circle Awards, and was also a finalist for the 1989 Pulitzer Prize. Golden Child premiered Off-Broadway at the Joseph Papp Public Theatre, received a 1997 OBIE Award for playwriting and subsequently moved to Broadway, where it received three 1998 Tony Nominations, including Best New Play. Yellow Face, which premiered at Los Angeles' Mark Taper Forum and New York's Public Theater, won a 2008 OBIE Award and was a finalist for the Pulitzer Prize.

Oskar Eustis has worked as a director, dramaturg, and artistic director for theaters around the country. In 2005 he took the helm at New York's Public Theater. Throughout his career, Eustis has been dedicated to the development of new plays as both a director and a producer. He commissioned Tony Kushner's Angels in America at the Eureka Theatre Company in San Francisco and directed its world premiere at the Mark Taper Forum. He was a professor of Theatre, Speech and Dance at Brown University, where he founded and chaired the Trinity Rep/Brown University Consortium for professional theater training. He currently serves as Professor of Dramatic Writing and Arts and Public Policy at New York University.

Click here for more information.
Posted by ChicagoPlays at 3:50 PM