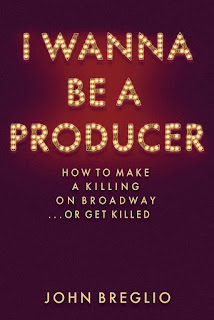 Wednesday, July 13 at 7:30PM
Goodman Theatre, 170 N. Dearborn
The League of Chicago Theatres will host a speaking engagement and book signing event with John Breglio for his new book I WANNA BE A PRODUCER: How to Make a Killing on Broadway…or Get Killed on Wednesday, July 13, 2016 at the Goodman in the Owen Theatre, 170 N. Dearborn St. The event will include a speaking engagement at 7:00pm, followed by a reception and book signing.

The event is free and open to the public. Reservations are required and can be made at: www.bit.ly/bregliochicago.

John Breglio has spent nearly 40 years working in all sectors of the entertainment industry, including theater, motion pictures, publishing, and music. As an entertainment lawyer, he was instrumental in helping his clients to produce and finance plays, musicals, and films. In 2008, he retired from his law practice to produce plays, musicals, and films independently, including the critically-acclaimed revivals of A Chorus Line and Dreamgirls.

Breglio has served as chair of the Theatre Development Fund and has sat on the boards of the American Foundation for AIDS Research, the Alliance for the Arts, the John Golden Fund, and Young Playwrights. He has also lectured frequently for the National Law Journal Seminars, the Practicing Law Institute, and at Yale University and Columbia University School of the Arts, where he has taught a graduate course on theater and the law. In 2005, he received the Actors’ Fund Medal of Honor, and he has been recognized for his contributions to the theatrical community by Joseph Papp’s Public Theater, the National Corporate Theatre Fund, the Alliance for the Arts, and Cherry Lane Theatre.

About the book
What does a producer actually do? How does one travel from that great idea for a show to a smash hit opening night on Broadway? In I WANNA BE A PRODUCER: How to Make a Killing on Broadway…or Get Killed (Applause Theater and Cinema Books Hardcover; April 19, 2016; $29.99), John Breglio shares an exceptional road map for the hows and wherefores, the dos and don’ts of producing a Broadway play. In this highly informative book, Breglio offers practical concepts for the aspiring producer and entertains with great personal anecdotes from his illustrious career as a leading theatrical lawyer and producer.

Breglio recounts his first-hand knowledge of the crucial legal and business issues faced by a producer, as well as his behind-the-scenes experiences with hundreds of producers, playwrights, composers, and directors, including such theatre luminaries as Michael Bennett, Joe Papp, Stephen Sondheim, Andrew Lloyd Webber, Patti Lupone, and August Wilson.

Breglio comments, “Ultimately, my goal is to give the business of producing the respect it deserves. It is a profession that requires numerous skills, both business and creative. It demands relentless fortitude and optimism, and it should never be assumed casually without recognizing the enormity of the task.”
Posted by BT at 11:40 AM