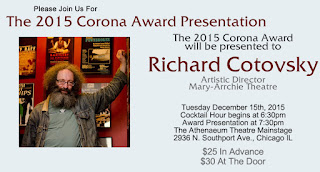 Eclipse Theatre Company will present its Seventh Annual Corona Award to Mary-Arrchie Theatre Co. Artistic Director Richard Cotovsky on December 15, 2015. The Corona Award honors an individual who has played an important role in supporting and nurturing the growth of the Chicago theatre community as well as small- to medium-sized Chicago theatre such as Eclipse.

The Seventh Annual Corona Awards will be held on Tuesday, December 15, at the Athenaeum Mainstage Theatre, 2936 N. Southport Ave. in Chicago. Cocktails begin at 6:30 p.m., and the awards ceremony begins at 7:30 p.m. An assortment of light appetizers and cash bar will be offered during the evening as well as a silent auction. Tickets are $25 in advance, $30 at the door, and are available at 312-869-4870 and www.eclipsetheatre.com.