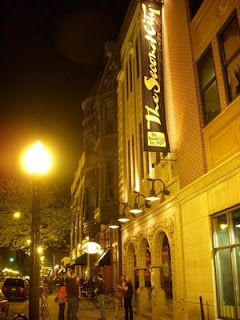 I was thinking about this panel we’re doing next week and thinking about Chicago influences on the wider world and more specifically what we as a community “export.” I asked myself what we have the biggest influence on and the answer I came up with…comedy…not exactly a revelation but…comedy is theatre. I think we have a lot to learn from that segment of our community, especially improv. What can we learn from Second City where they have slowly but surely built an empire over the last 50 years from their always slightly shady digs at 1616 North Wells? What can we learn from the smallest of improv companies being invited to comedy festivals all over the world? No, we can’t re-write our plays so that they more accurately reflect current events, but…how can we use that incredibly nimble and responsive way of working in other ways? How can we quickly change and adapt to rapidly evolving economics, demographics, tastes and styles and yet be sure we always stay who we are at our core?

For me, as the leader of the League, the question becomes how can we take the idea of Chicago theatre and make it as strong a brand as second city comedy (and I mean second city lower case)? Most of us have the slightly shady digs thing down, but as we think about ourselves and others think about us as the best theatre town in the world, how do we communicate that simply, how do we take over 200 theatres (including comedy theatres) with 200 missions and communicate to the world one message about Chicago theatre? I don’t think anyone ever set out to brand Chicago comedy, so maybe it is something that evolves. Maybe the message is already there and we just need to corral it and use it to our advantage. Any ideas?
Posted by ChicagoPlays at 2:44 PM

But with no money, staff, or time it quickly turned into a networking event once in a great while.

But we haven't met in about 2 years.